It hit me, at some point during my final days before graduation, how much the last four years have truly changed me as a person.  Let me throw out a huge disclaimer here before we start: I usually keep my self reflecting and emotional moments to myself.  Between all the reflective Facebook statuses, Tweets, and other social media messages that my friends and classmates have used to express their feelings toward finishing up college, I just never really felt the need to do so, until now.  I realize that I have met so many people, done a lot of different things, and learned so much through the past years, that I will hate myself if I don’t at least take a few minutes to acknowledge it.

I don’t want to bore anyone with the details, if you want to know them then just ask me, but really I just want to touch on the important parts.  I learned how to work hard in college, no that does not mean I put in as much study time as I probably could have, but I learned to get done what needs to get done, and when above and beyond is necessary.  I learned how to utilize my own strengths, in school, in work, and in my social life.  I learned how to have a really good relationship, and how incredibly fun it is when you do it right.  I made the best friends I have ever had, and learned how special having them really is.  I learned that waking up drunk is better than waking up hungover.  I learned that you should live your life the way that you want to, and the way that will make you the most happy.  If anyone tells you that you’re doing it wrong, take their advice into account, or just politely tell them to fuck off.  I learned how important my family is, because as I have matured so has my understanding of what a huge part each and every one of them plays in my life.

Most importantly, I learned from some very smart people that despite what schools and exams and resumes and numbers try to tell you, life is just a series of experiences.  If you get something wrong it’s okay, learn from it and move on.  If one day sucks, the next one will get better.

I am fully confident that I will learn as much or more in the next four years as I did in the last.  It may get harder, and having real responsibilities will bring about new challenges, but I think I can do it.  Through two schools, five jobs, and too many amazing memories to count, I have somehow figured out who I am.

I guess if there is one thing I have to say about the last four years, it’s that all of it has been really fucking fun.

When I started my work at Drifty in late April, my bosses both encouraged me to feel empowered to be bold and take risks while working there.  When I started off, there was not much opportunity to do so.  My first mass email campaign was a massive failure with our users, and I was feeling pretty risk-averse. 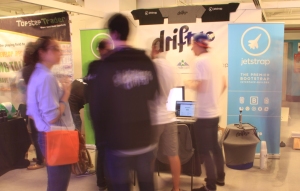 In early June, however, I struck up conversation with a rep from Techweek Chicago, the largest annual tech gathering in the Midwest, and was able to secure a sponsorship for well below market price.  This sponsorship included me attending the entire conference (speakers, expo, events, parties, over $600 value), and our team getting a booth at the expo for the entire day Saturday (a $2,000 value).  Through offering a few free licenses of our products as a bit of a trade, Drifty was able to have this presence at Techweek for about 73% off book value.  I finally felt like I had taken a big risk, it paid off, and my superiors were EXTREMELY supportive of all of it.

We wrangled together marketing/display materials over a rushed two-week period, and I set off for Chicago on June 26.  From Thursday to Saturday, I attended 12 speaker events, 3 networking events, and 2 sponsored parties.  I met well over 200 people that had extremely valuable knowledge and insights, and made some great conversation.  Most importantly, the Drifty team was able to get our products in front of (literally attendees were using our tools on computers at the expo) thousands of potential new users.  We learned a ton about how different users initially perceive our products; a process that is far more apparent in person than over a computer, and we saw genuine excitement about our software from tons of tech lovers.

Techweek Chicago is an experience I will never forget.  It will be an ever-present reminder of how empowering and trusting bosses (our esteemed co-founders), a willing and dedicated team, and an open mind can lead to a truly valuable and remarkable experience.